The former EWEB headquarters (my photo).

This past week was an eventful one on the Eugene scene, at least from my perspective as someone interested in matters related to architecture and urbanism. The week was equally busy and eventful for me on both the work and home fronts, so I’ll keep things brief and breezy with today’s blog post. I simply feel compelled to acknowledge these developments and offer my thoughts on each. 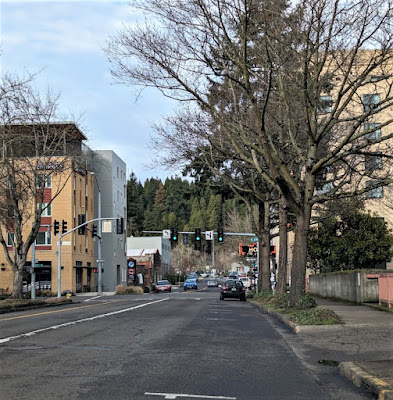 Protecting views toward Skinner Butte and the Shelton McMurphey Johnson House is important. That said, will increasing the height limits as requested by the Obie Companies eliminate some currently available vistas toward these landmarks? The reality is any new buildings on the vacant parcels they own along Fifth Avenue will obstruct views, whether they are two stories or seven stories in height. These parcels are now mostly surface parking lots, contributing nothing beyond acres of asphalt and far from being scenic. The proposed developments will include street-level retail, which will enliven the pedestrian experience, not to mention welcome density and eyes on the street, while relegating off-street parking to concealed garages. The key will be to ensure the most crucial views do remain. I contend the most important vista is the one looking northward along Willamette Street toward Skinner Butte. It’s arguable that a narrow view corridor along the Oak Street axis north to the Butte should be maintained but restricting taller construction on either side of that corridor would provide no discernable benefit from the standpoint of access to desired views.

Arcimoto Woes
Perhaps the most surprising news I learned of was word that Arcimoto shut down production at its west Eugene factory and is facing bankruptcy. I wasn’t aware of the depth of the company’s troubles, including the fact that it had cut jobs and furloughed workers as early as last September as the value of its stock plunged. It was only seven months before in February of 2022 that Arcimoto opened its new 250,000 sf manufacturing facility. Apparently, supply chain bottlenecks were part of the problem, but also dwindling cash reserves and poor sales (Arcimoto only sold 41 of its vehicles during the second quarter of 2022). 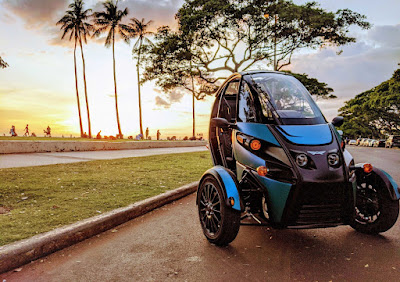 FUV promotional photo, from the Arcimoto website.
I had high hopes for Arcimoto and its everyday electric transport, the FUV (Fun Utility Vehicle). Yes, its price is on the high side (in the $20k range), especially when compared to those of conventional automobiles at the lower end of the market spectrum; however, cost was never Arcimoto’s principal selling point. Instead, the promise of the lightweight, high-performing, three-wheeled, tandem-seat FUV rests in its potential as a truly sensible means for getting from Point A to Point B. We need to transition away from our reliance upon oversized cars and trucks and the demands they make upon the urban landscape. The all-too common instance of a lone driver slogging about on short hops in a massive, gas-guzzling, 7-passenger SUV reflects misplaced priorities in a world beset by environmental crises and social inequity.
I really thought Arcimoto was on the cusp of something great, and that the potential market worldwide for its FUV would be immense. I still believe the infrastructure of American transportation and energy systems must be radically altered to accommodate new, healthier types of transportation and vehicle use. We still need to reassess what it is we truly need for personal transportation. If the Arcimoto experiment is destined to failure, the loss will not only be Eugene’s but also that of advocates for change everywhere.