Stay ON the Grass 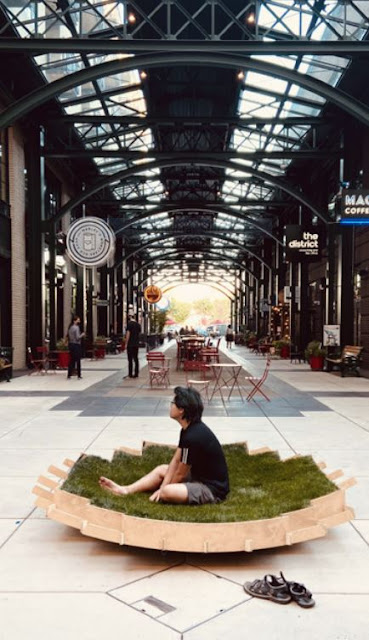 The 2020 outbreak of the COVID-19 pandemic struck suddenly, disrupting the routine and normalcy of everyday life. Social isolation and trepidation, job losses, the closure of businesses and schools, and unremitting news of mounting deaths exacted a costly toll on the mental health of many. As is true with far too many indicators, those hardest hit by the pandemic were and continue to be the undeserved in our society. This demographic suffers from higher rates of COVID-19 infection and mortality, and lower rates of subjective well-being. Notably, researchers at the National Institutes of Health found those with the least access to nature—predominantly those living in lower-income, non-white neighborhoods—experience higher rates of infection. While the material deprivation and economic anxiety wrought by the pandemic plays a role in the mental well-being of low-income households, the stark inequity in the amount of available green space relative to that which affluent, predominantly white populations enjoy underscores the NIH findings.
It is against this factual backdrop that Ryan Al-Schamma, Assoc. AIA (along with Erika Beehler, Sang Pham, and Anna Petrick) developed a prototype architectural installation called Stay ON the Grass (SOTG). The non-profit project aims to create a recreational social distancing pod for those in dense urban areas with little access to usable green space. Ryan envisioned SOTG as a commentary upon the racially biased state of urban design today, one that disproportionately provides and maintains desirable green space for more affluent populations while affording less access to nature for the underserved. For Ryan, the SOTG project Ryan is also an exercise in guerilla urbanism, a means to democratize green space for all.
In simple terms, Stay ON the Grass is a “recreational social distancing pod.” The concept and form of the pod is derived from the chalk bubbles that cities like New York and San Francisco outlined on some of their grassy parks to enforce social distancing while allowing people to enjoy fresh air and greenery during the height of the pandemic. While these bubbles became a symbol of resilience in the face of a life-threatening virus, they were only accessible to some—the few and the privileged. This fact compelled Ryan and his fellow team members to develop the Stay ON the Grass project, to complete a prototype in 2021 (as seen in the photo above), and now pursue further development of an optimized design as proofs of concept, suitable for street installation and testing.
Each SOTG pod is a dish of grass and wood that rocks and sways when used due to its concave form. That concave form matches the curvature of the human anatomy when reclined—in effect, a living, urban hammock. The kinetic nature of the installation relaxes users while creating visual interest for passersby.
Padding the inside of the dish with live grass creates a more comfortable surface for users to occupy while quite literally putting them in touch with nature. The physical connection to nature soothes users directly and passersby indirectly by injecting greenery into otherwise austere cityscapes. Health professionals know access to nature is an important antidote to anxiety, depression, stress, loneliness, poor sleep, mood disorders, drug use, schizophrenia, and other health issues.
Deployed in areas otherwise devoid of nature, the SOTG team envisions its pods providing green, universally accessible, COVID-free parklets. They imagine them retrofitting impoverished paved spaces to create softer, more desirable landscapes.
Though Ryan’s ambition is to see widespread deployment of SOTG pods wherever they are needed, a worthy goal of the SOTG project is to symbolically, if not altogether practically, address the inequity inherent between city environs devoid of nature and wealthier neighborhoods blessed with an abundance of parks.

Redesigned Stay ON the Grass prototype.
SOTG is looking for material and financial support for the construction of its new, optimized design, which features improved constructability, uses half the amount of material as the prototype design, drains better, and requires less maintenance. The immediate goal is to construct three SOTG pods for display here in Eugene this summer, as well as three additional pods to be installed separately in Portland. After this round of installations is complete, SOTG proposes to open source the design, so cities elsewhere can replicate the concept.
Below is SOTG’s materials list and estimated prices per unit:
Ryan and the rest of the SOTG team are presently seeking financial support from building and design-related businesses to make this summer’s installations a reality. If you’re interested in helping directly or have any leads for potential sponsors, reach out to Ryan by email at ryan.alschamma@gmail.com. SOTG will recognize all contributors wherever they install the pods, as well as in all written publications regarding the project.
Posted by Randy Nishimura, AIA, CSI, CCS at 9:35 PM