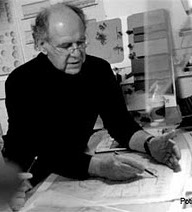 Otto Poticha, FAIA
The second in the Building Modern Eugene lecture series at the Shelton McMurphey Johnson House featured none other than the effusive Otto Poticha, FAIA. Never one to shy away from an audience, Otto spoke last Wednesday evening on the topic of Eugene architecture—where it has been and where it is taking us now.

According to the Book of Poticha, the story of Eugene architecture begins upon Otto’s arrival in Oregon. With his young family in tow, Otto moved to Eugene in 1962 from the Midwest. He was attracted to the city by its reputation as a wellspring for a new brand of regionally-specific modernism, inspired by the endlessly varied Pacific Northwest landscape. The uniformly high level of work produced by local architects likewise impressed him. The fact that Eugene was a small town on the verge of becoming a genuine city appealed to Otto.(1) A single well-designed building could make a real difference. He surmised that Eugene’s architects were respected shapers of the community’s future.

By contrast, Otto left behind a far more conservative culture, architecturally speaking. He arrived from a place where bankers wielded greater influence than architects upon the design of everyday buildings. Familiar and formulaic was the rule of the day, rather than risk-taking and moving forward. It’s no surprise Otto chose to pursue his career here. Compared to the Midwest, Oregon beckoned like the proverbial land of milk and honey.

Back in the 60s and early 70s, Eugene was the lumber capital of the world. It was prosperous with good schools, good policing, and stable employment. Downtown businesses still thrived. “Dragging the gut” was a popular pastime on weekend evenings. The large student body and diverse faculty of the University of Oregon contributed greatly to the qualities that made Eugene a “unique place.”(2) Some of the city’s most significant modern architecture, including the civic center collection—City Hall, the Lane County Courthouse, and the Federal Building—was designed during this period.

Then again, Eugene’s moneyed lumber barons didn't flaunt their wealth by investing in expensive buildings. They drove around in crummy pickups rather than show their employees they had made some money. For the most part, private developers and land owners built cheaply. It was in the public sector where the most creative work was accomplished. Even there, though, parsimony was the default condition. Among the legacies of that miserliness is the entire generation of post-war K-12 school buildings. Built quickly to meet the burgeoning needs of the baby boomers, the structures now suffer the consequences of economic expediency and sporadic maintenance.

By the early 80s, the spirit of innovative architecture that existed in Eugene when Otto first moved here had largely vanished. The deleterious effects of that period’s economic recession left many of Eugene’s architects with no choice but to leave and seek work elsewhere. The city’s visual infrastructure decayed, as retailers vacated downtown storefronts and buildings turned shabby. Oregon became increasingly conservative in its fiscal outlook, culminating in the 1990 passage of the Ballot Measure 5 property tax limitation legislation.

Otto believed this conservatism still consumes the production of architecture in Eugene. One effect is our community’s aversion to change.(3) Eugene is also disinclined to substantial investments in the public realm. We lack money to improve our built environment simply because we’re unwilling to pay for anything. Otto quipped that our city motto should be “woe is me.” He made the case that government can afford to be extravagant, even if individuals cannot.

Another impediment to bettering Eugene’s built environment is paralysis by consensus. Otto hates consensus. In some respects, consensus mitigates risk but the results are too often vanilla. Eugene has decided vanilla is okay even though there are many other flavors. Consensus needs to be codified, so the outcome of well-intentioned public processes is sets of written rules. Otto lamented that architects have become clerks dependent upon the crutch of these rules. Creativity and truly innovative, out-of-the-box thinking is effectively stifled.

Ten years ago, Otto famously described Eugene as “butt ugly.” He continues to stand behind that assessment. It’s hard to disagree with him: too much of Eugene is characterized by lowest-common denominator development and an absence of will to do much about it. To really see Eugene, he said, just look at the city after its camouflaging cloak of leaves has fallen and the tawdriness of the environment is laid bare. Much of Eugene really is ugly.

So what did Otto see in the future for Eugene? Is there any hope for our city?

Otto felt there is hope if we can overcome our distaste for risk and change. Given the makeup of Eugene’s business community (largely comprised of small businesses with limited capital) Otto argued that the public sector must take the lead. He made the case that leadership with the courage of conviction and a dedication to improving Eugene’s public realm is necessary. Visionary leaders move forward with ambitious plans. They don’t fall back upon the false comfort of the status quo. Visionary leaders would care to understand the features that make Eugene, Eugene. They would support projects that take chances, shake things up, and make positive changes.

Otto presented downtown Eugene as a case study: it will never be a regional shopping draw again but there is potential for it to become a mecca for the creative class, a place where people want to live, work, and actively engage in urban life. For this to occur, Otto stated we should not copy work done elsewhere because nowhere else is Eugene. Our downtown should be as unique as we think our city is. Making it so is where the art of architecture comes into play. There’s a big difference between creating architecture and merely building. Architecture with a big “A” will be the means by which downtown becomes a place everyone immediately associates with Eugene because there’s no other place it can be. Otto is certain that artful architecture has the power to instill pride in Eugene.

Ironically, Eugene is Otto’s home rather than Portland because the design scene in 1960s Eugene seemed more progressive to him. Today, no one would claim that our city is nearly as visionary and willing to embrace change as Portland is. “When you're in Portland you feel a pride in the community," Otto said. “In Eugene, there is no such pride." A significant measure of Portlanders’ esteem is derived from the Rose City’s urbanity, the product of forward-thinking politicians and talented architects, landscape architects, and urban designers. To instill community pride in Eugene, we must similarly accept change and take on stewardship for this place we call home. If Eugene’s urban spaces are important to us, we will care for and maintain them. Such is the hallmark of a truly sustainable city.

It’s been Otto’s crusade since he arrived in Eugene to convince The Register-Guard newspaper that architecture is an art. Moreover, it is the most difficult of arts, requiring consummate artistry and skill. If we can summon our best efforts as architects and take farsighted leaps of faith, perhaps Otto will amend his assessment of Eugene. If we’re fortunate, there will soon be a day when he no longer considers Eugene “butt ugly” and the R-G celebrates the triumph of architecture over mediocrity.


*  *  *  *  *  *
The next lecture in the Building Modern Eugene series at the Shelton McMurphey Johnson House will feature Joe Barthlow. He will present a “hands-on” look at the restoration of his Cliff May-designed mid-century modern home on Wednesday, April 20 at 6:30 PM.


(1) Otto suggested Eugene is a “smaller town” today than it was when he arrived in 1962. Not, of course, in the literal sense but rather when it comes to the community’s self-perception.

(2) Despite its impact upon Eugene’s culture and economy, the University remains even today more a foreign country within the city’s boundaries than an integral part of the community. Otto reported that none of his colleagues at the School of Architecture & Allied Arts rose to his challenge to testify at the recent public hearings regarding the fate of the proposed extension of the EmX bus rapid transit system in west Eugene. I previously blogged about the “town & gown” dynamic and the historic disconnect between the UO and the local architectural scene.

(3) Otto asserted that many of those who oppose change are transplanted Californians who witnessed the decline of their slice of heaven on Earth and vowed not to relive that experience upon moving to Oregon.
Posted by Randy Nishimura, AIA, CSI, CCS at 9:31 PM

Email ThisBlogThis!Share to TwitterShare to FacebookShare to Pinterest
Labels: talkitecture

hold on there partner...

Coming back to see what's going on after 40 years it ain't as bad as Mr Poitcha thinks...

Yes downtown has died but some still thrives over at 4th Street across from the old Vitus Electric Store and it is a delight to walk around that area and try to find "Snappy Service Number 5"...River Valley Shopping Center is a true slum but did not have a chance to go to the Hotel and Restaurant nearby...

Yes we did drag the gut, on Willamette past the movie theaters, past Kaufmann Brothers, past Burch's, past Seymour's and past all the rest of the shopping on that street...and past Hamburger Heaven...way out south...


Now whether downtown died because of that awful mall or just from the big box syndrome is anyone's guess but the genius "Garrett Eckbo now EDAW" and his terrible pedestrian mall design ideas did not help (see Roseburg which has a preserved downtown if vacant that was killed by the big box)and goes to show just how far one should trust the new ideas of planners or architects...and maybe the best ideas are the old ones...

There WAS a difference between Halprin and Eckbo...

The University still flows into the town and presume Max's still packs them in with cheap Oly...

The trees help and sure the Springfield and Fernridge sprawl is not all the cool but overall it is still a rather nice place to visit....

It ain't all that bad and the steep walk up Skinners Butte from the River is still cool...

And stumbled in here because I grew up in the Cliff May in the 50s Joe Barthlow restored... 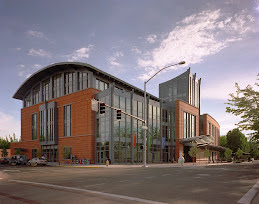